He Died For Me 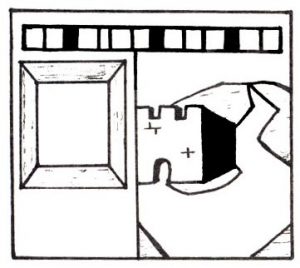 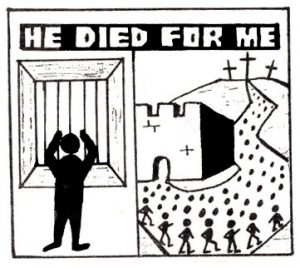 That’s right! He was in Jail! He deserved to be in jail. He was a theif and a murderer. The law at that time said that the punishment for murder was death. Did Barabbas deserve to die according to the law at that time? Yes, he did.

Barabbas heard a crowd outside and looked out to see what was happening. (Draw Barrabas at window.) The crowd was yelling his name, then they began yelling, “Crucify him!” Barabbas became frightened; the time for him to be killed had come. A guard came and took him to the judge, who announced that it is a custom at that time of year to let one prisoner go free. He, Barabbas, had been chosen. Did he deserve to go free?

No, he did not. But he was set free anyway. Barabbas went outside, where he again saw the crowd, now headed up a mountain (draw crowd). Following them, he saw three crosses being put up. On two of the crosses he saw men he recognized; they were thieves who had been in jail with him (draw these two crosses). But on the third cross hung a man he did not recognize (draw center cross). He asked a person nearby, “Who is that on that cross there?” The man answered, “Haven’t you heard? They let a thief and murderef named Barabbas go free and they are killing Jesus instead!”

Jesus didn’t just die for Barabbas; He also died for each one of us. The Bible says we all deserve to die for our sins. (Rom 6:23) But we can have eternal life in heaven with Jesus if we put our total trust in Him.